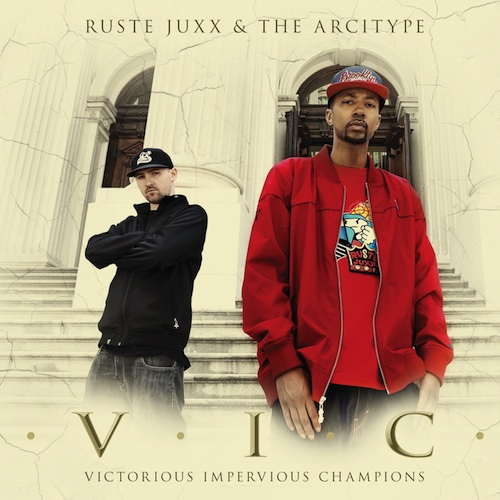 I can say, without hesitation, that Ruste Juxx has been on of the most prolific artists in the last few years.  He has been featured donzens of times on other people’s projects. He has been on a a blistering pace of almost releasing two albums a year and V.I.C. is his second of 2012.  His first project this year was with French producer Kyo Itachi, entitled Hardbodied Hip Hop.  That album was outstanding and I thought Juxx had outdone himself with that effort but, V.I.C. expounds even further on that effort, making it one of the top notch albums of 2012.   I believe one of the reasons this album shines so bright is the beat selection from producer, The Arcitype.  He is able to fuse different sounds together for an album that I really hadn’t heard before and that only enables Ruste Juxx to showcase even more of what he can do with the microphone.

Can Only Be Me, production wise is hard, edgy, and built to go hard.   It’s dark and aggressive with the choral electronica.  I also love the use of the staccato violin that comes and goes throughout the song.  Ruste Juxx isn’t just about bucking down the competition.  You hear on the track, a man whose hunger for the prize can not satisfied.  The man is doing himself and could care less about the haters.  They only provide inspiration.  Peep the lyricism on the first verse:

I can only be me, myself, and I / Great father, plus I’m one hell of a guy/ But them haters is ill / They be doubtin’ the skill /  Like I can’t take it to the hole, handle the pill / I’m a man of my word and my word is bond / And the bond is unbreakable, incredibly strong / I be out and about making miracles happen / You be down in the dumps while your enemies laughin’ / I won’t ever change cuz of what they say about me / As long as I’m the hottest topic and they talking BOUT ME / In the zone son my pen game’s sharper / Weed got lighter and my liquor got darker / You be on their diggin’ that man Juxx’s delivery / Punch him in the face, he gonna call security / Superior don’t deal with stupidity / Bring it to the hood and raise the humidity

Rock To The Rhythm is a track that we have already spoke upon but damn this is a choice jam.  It’s definitely a track that you are going to want to ride to at full volume.  The Arcitype provides one of the more unique production meshes of the album.  It’s amazing how he blends something to bounce to with that gritty street flavor.  He also intermingles what I consider a little Middle Eastern synth that you would most expect from a 1990s West Coast cut (ala The Luniz) but he incorporates it seamlessly into this joint.  On cue, Ruste Juxx knows exactly what to do with a beat this tasty…he bodies it.  He utilizes a quick rhyme scheme and, by all appearances, an effortless flow.

There are lots of great guests featured on this album, but my favorite collaborative cut involves Shabaam Sahdeeq, Guilty Simpson, and Ill Bill.  The track is called The Walking Dead.  The cut starts with a maniacal laugh and then proceeds into a flurry of illness.  The Arcitype puts a new twist on spooky with what sounds like harpsichord-type-keys and an musical eeriness that reminds me of the sound effects from Scooby-Doo cartoons .  All the emcees bring a definite degree of filthy wordplay that sounds very cohesive throughout.

In conclusion, you are used to Juxx’s tough deliveries and bars that will body the competition but this album is different.  I think he takes flow and lyricism up a notch to give you (the listener) the absolute best product.  You are also not going to hear production like this from anyone else or on any other project.  The Arcitype is bringing his own unique blend of hip hop flavor to the table.  It can best be described as musical alchemy.  His melding of sounds is amazing and you can’t label it.  The emcee and producer, together, build momentum with each track until we have one of the best albums crafted this year. Enjoy this one!