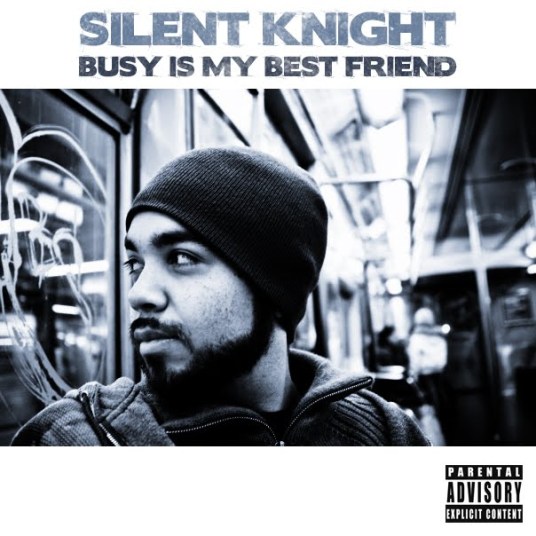 Album: Busy Is My Best Friend

Source:  Been Knowing About This One

This is easily one of my most anticipated releases of the year.  Ever since I heard The Audible Doctor produced cut, Stayin’ Busy, I have wanted to hear the entire album from Silent Knight.  And now that I finally have it in my hands (after waiting  months upon months), I am not disappointed in the least.  SK has a commanding presence on the mic and that becomes more and more apparent with each track on Busy Is My Best Friend.

And while Stayin’ Busy is still my favorite track off of the album, there are plenty of other gems to be found.  One of my other favorite tracks,  What Would I Do, features a verse from one of my all time favorites, and recently retired, Kam Moye.  The beat is lead by the soulful vocals of Neenah and a piano loops it’s way around the beat, proving, mellow, yet sobering at the same time.  SK and Kam Moye both show a lot of introspection by the way they share their thoughts about themselves with you. If you look at the bulkhead of their previous material you will find that this is the perfect duo to team up on a track. It’s this type of lyricism that is allowed to be described as being real.

Build Truths is another track that stands out to me.  Analogic laces the beat for this joint.  He uses some strings and some neck snapping drums as the back drop for Silent Knight’s lyrical fore.  The tempo is slowed down as SK talks about breaking down walls and reaching people with his music.  He just has an elevated mentality and seemingly an understanding of the bigger picture that often times winds up eluding us.

The Noid is a little different in terms of the production.  There are a lot of things going on musically and vocally.  There is a piano loop that sounds as though it was taken off of a Player Piano from the old west, what sounds like bassoon (that’s just a guess, don’t hold me to it), and MeLa Machinko providing the vocals for the chorus.   But all of this really comes together for the concept of the track.  I have never heard a track seem so unsettling yet sound so good.  This is really is pretty unique on it’s own standard.  SK drops rhymes at a frantic pace, that gives you that neurotic feeling.  And that is exactly what he is going after here:

Tomorrow is rock centirc track that incorporates a Soul Qloc from Silent Knight’s other project, A Band Called Fuse.  I think it’s Johnny Madwreck who is responsible for the production on this joint and it really knocks.  It’s not too heavy on the guitar and incorporates a lot of other sounds.  SK is proud of his ability to bring the listener eclectic sounds and thought provoking rhymes and you can tell that especially well on this joint.

Overall, Busy Is My Best Friend, while a blend of different styles and ideas, is one hundred percent hip hop.  SK is among elite company when it comes to his shear skill to rock mics, but in addition to that, he brings a truly human element to his rhymes.  Throughout the album you can hear his drive for success and his sacrifices in doing so.  You can also hear his observations and perspectives on life.   Let’s face it, when your music is real, that really means it is relate able to others.  And with the being said, I can relate to what Busy Is My Best Friend is telling me.