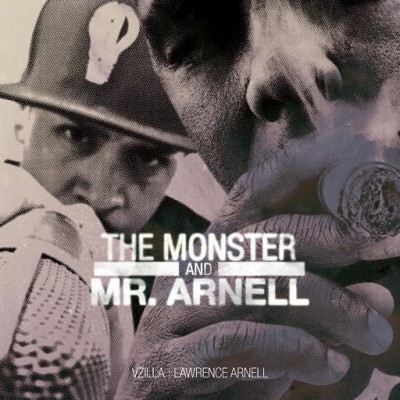 Album:  The Monster And Mr. Arnell

It’s more than just a Army Of The Pharaohs thing.  It’s more than just a Houston to Philadelphia thing.  The Monster And Mr. Arnell is a showcase of some of the most promising talent, not only on the AOTP team but currently in the game as a whole.  I have been showcasing V-Zilla for quite a while now as an emcee and Lawrence Arnell on his production credits.  Now the two have combined to deliver a compelling project for hip hop heads of all walks to appreciate.

On Hold Steady, the emcees flip over a hype guitar infused production, as they declare that the people are not ready for the project they are delivering.   It’s very much a true introduction, not only into the project, but the men as artists as well.  They call out all competitors who may have gotten their heads gassed by their friends and back it up with some tough deliveries. They trade sharp bars and play off of each other’s styles quite well.  It’s obvious on a track like this why the two decided to combine forces to tear it down.

Rap Shit is a more somber track that is lead by a piano loop and a dark bass chord.  Zilla and Arnell know how to attack a beat like this and they do so with candor and tenacity.   A lot of people have illusions as to what the rap game is all about but these guys are out to dash those misconceptions.   Listen how The Monster goes in with his first verse:

Yo, fuck all the politics / Whatever the drama is / I just want to drop a disc / Form a new metropolis / Do a little tour, rock a stage, maybe shop for shit / Cop a couple of kicks and pay the rent before tomorrow hits / Pop this in your deck, feel the hard shit we speak about / Blow your fucking speakers out / Show us what you be about / Death on the horizon ain’t always what you read about / See me now?  Give me about a month and I’m Tahiti bound…

Clarity is a track that has the emcees coming to grips with suicidal tendencies. The production embraces an organ loop along with some heavy drums.  The song brings you into the mindset of the emcees which is a conversation in regards to survival or letting go.  Peep V-Zilla’s psyche on this cut:

…probably should’ve been buried when I was caught in a flurry / you never recognize your calling when the signals is crossing / Used to do a lot flossing, popping bottles real often / My uncle murder, seen the coffin / Nigga I really lost it / Tried to scramble to the service but I drowned in the process / Bamboozled, bad voodoo, whatever the reason / Put a pistol to my noodle like I’m fixing to squeeze it / Never mind the circumstances or the rules of cheating / I always knew I’d meet my ending by the hands of my demons…

All this is not to say the project is without it’s lulls.  There are a couple of tracks that did not manage to carry the duo’s intensity forward.   For instance the track Phoebe Crates had the same musical intensity as the rest of the album, but seemed misdirected.  The chorus really didn’t feel natural to me and didn’t really serve as the ‘Honey Hunting’ anthem it was supposed to be.  It, in general, did not seem to fit the course of the album.

But, regardless, at the project’s height, Arnell and Zilla deliver banging hymns that rattle the soul. The Monster & Mr. Arnell more than not rises to the occasion with it’s level of integrity in rhyme and production.  The lead single, The Excellence, is a prime example of what these emcees are capable of musically and the title of the track aptly describes that capability.  Their wordplay and chemistry prove potent and their keen ear for beats sets them up for ongoing success.

If you are looking for an album from two of the nicest beat murders, then you need look no further than The Monster & Mr. Arnell.