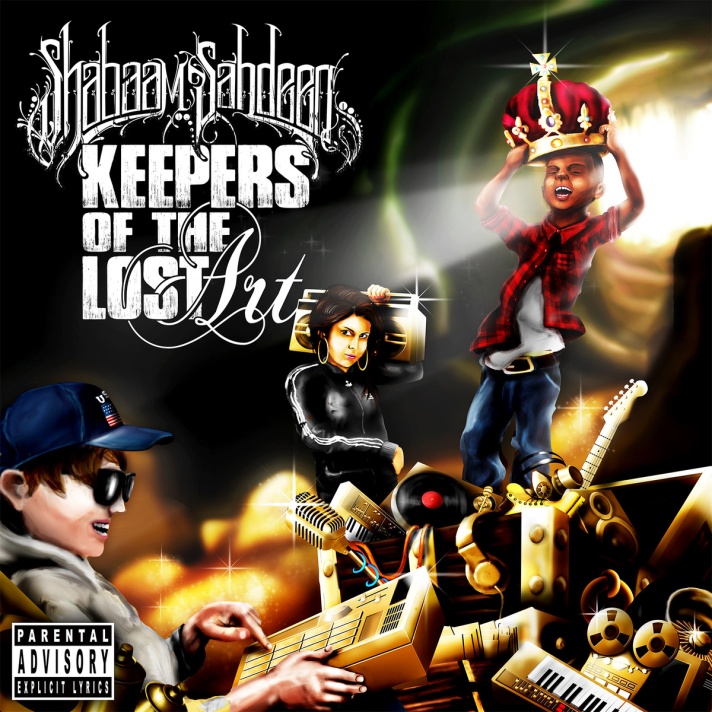 Album: Keepers Of The Lost Art

This is the first review of an album that we have done for Shabaam Sahdeeq.    That’s odd because we have posted a ton of singles for various other projects, but this is really his first viable album in a long while.  He has stayed busy with a bunch of mixtapes and guest features, all the while creating and crafting his own album,  Keepers Of The Lost Art.   The album has actually been a long time in the making, as I first heard this album titled a couple of years ago.

So what can one find for themselves as listeners of Keepers?  If I could give you one word it would be…refinement.   Everyone knows that Shabaam Sahdeeq is an ill rhyme slayer, but could he put together a dope album that you could tell was his own?  The answer is , yes.  There is a lot of polish on this release.  The production and the guest spots are put together with a lot of precision. No wasted motion so to speak.  But any time you have a solo album, you need to be able hold down you part of the bargain on the tracks without guest spots, and he does this time and time again on this release.

One of my favorite joints from the album is,  Playing Games.  In contrast to the track’s title, Shabaam Sahdeeq is taking his career very seriously.  While a lot of emcees are just doing this as a hobby,  he has made being an emcee a career and this is how he puts food on his family’s table.   He goes on to offer some sound advice that whatever you want to achieve, make sure you don’t half-ass it.  If you put your everything into it, you will be amazed as to what you can accomplish.  Within the following bars you hear the determination and the hunger it takes to achieve:

…I got a few kids, lot of mouths to feed / So I can’t get all caught up in the garbage that you all see / I’m dedicated, determined, training to stay a champion / Without focus and discipline, the game can’t be won / I’m the top gun, the prodigal son / Blood, sweat, and tears before any type of fun / So let me see your war face, we move like Spartans / We going for the dolo, we don’t beg no pardons

There are a lot of hard bodied hip hop joints on this album and one of those being the collaborative track with Wais P and Sha Stimuli, That Dope.  The beat is fire, the lyrics are on point, and the triumvirate is completed with an ill Nas snippet scratched in as the hook.   These three artists are all on the same page (rarer than you think) and really work well together when crafting a banger.

The single Tranquilo reunites producer Harry Fraud and Sahdeeq and we all know what tends to happen when they work together.  Yes, you got it,…impeccable music.  Fraud intermingles a rock component into the track while sill preserving the boom bap elements.   Sahdeeq then gets heavy handed with his rhymes, silencing the naysayers and the competition simultaneously.

On Seasons Change we get a look at what a professional emcee really is.  Shabaam Sahdeeq shows that he is not one dimensional as he can flip on beats of a jazzier nature.  A lot of artists these days obligate themselves to one particular style and can’t branch out any farther.  This is not the case here.  Lewis Parker give this beat a gentleman’s touch and a laid back vibe while Sahdeeq’s voice just seems to hover right above the drums and the horns with a charismatic flair.

Keepers Of The Lost Art could not be a more appropriate title for this album.   Shabaam Sahdeeq has put in a lot of time and energy into perfecting his craft in an era where everybody is looking for a quick hit so to speak.  People at every turn are willing to turn a blind eye  to the art in order to make a quick buck.  He  has made a career of doing just the opposite .  This album embodies the notion that there are emcees and producers that are willing to stand on merits of their talent, make a living, and at the same time preserve the music that they love. The album shows progression and refinement that in the end is a testament to the rest of the industry on how to make great music.