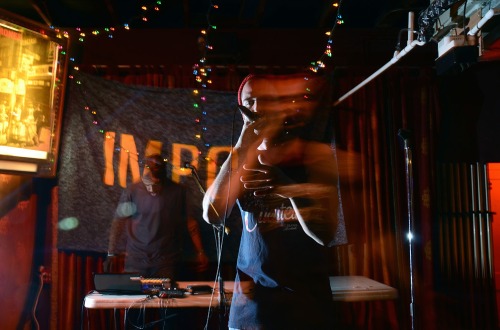 I am pretty excited…no, let me rephrase, I am very excited to bring you some thoughts from one of the most creative emcees in the game, PremRock.

I have been listening to him for a couple of years now and in an ideal world, I would have connected with him at SXSW a couple of weeks ago.  But that was not in the cards.  Still, I wanted to pick his brain about, his art, his friends, and his perspective.  What I got in reply was well thought out introspection.

I encourage you to read the interview, check the video freestyle (it’s amazing) and make sure you cop all of his music.  If you love creativity in your hip hop, you are going to be an instant fan of PremRock.

HHD: So give folks the story as to how and when you decided to try your hand at being an emcee?

PremRock: It was certainly a long process. Discovering hip-hop at the age of 5 or so when I heard Eazy-E I was drawn to it magnetically but it wasn’t until years later that I actually “tried” rapping and I’m pretty sure it was a train wreck. I took my time and realized I didn’t have the chops yet, so I worked at it. Certain attributes came natural but a lot took time. It’s crazy that today anyone can record and present their works to the public in a matter of a day, whereas I spent a good decade in the oven until I decided I was ready. It’s like a football player jumping from flag to the NFL.. that doesn’t happen right? Nor should it in music.

HHD: At one point in time you were performing under the monniker, Premonition? Why the name change? Was it an overhaul of sorts or something simpler?

PremRock: Yea it was a combination of factors. One being my frustrations of lack of “googleability” when folks tried to find me online they couldn’t. Another would be the fact that I chose the name when I was stoned in Chemistry class at age 14, so am I still really that kid? No, not at all. I was in the studio with C Rayz Walz a few years back and started my verse with “Prem, rock the..” and he kept calling me “PremRock.” I used it a few times in more verses but still kept “Premonition” because so many folks knew me as that. I finally made the switch after realizing it was a wise branding move and feeling comfortable enough to move forward with it. So yea… now i’m PremRock and it’s one word.

HHD: One thing that I have noticed is that you associate with some exceptionally creative individuals, most notably Willie Green. How did you guys connect and start working on projects together? What does he offer you as producer?

PremRock: I believe in Green as much or more than anyone I’ve ever met in music. We were introduced at a popular open mic called “Bondfire” about 4 years ago by the homey Warren Britt. I needed an engineer for my first official project and I was impressed by his mixes. We hit it off pretty much after a few sessions and decided to do a full-length together. We then hit a tour together both here and overseas and became just really good friends. I was in his wedding, we know each other’s families, and if real life shit goes down we know we can both call each other. That’s very valuable to me. He offers anyone he works with 100% professionalism, versatility and uncanny ear for making superlative music. I trust him with my sounds completely, and he’ll be mixing my records whether he produced them or not for a very long time.

HHD: How would you describe the album you two put out? You also remixed the entire album. What was the thought process in doing that and what do you think of the end result produced?

PremRock: I love the album we put out. Still think it was slept on by far too many people, but hey that’s the nature of this thing. It was organically done, I would come over and just listen to beats and we would talk but the entirety of the writing process I did alone, I’m not really an in-studio writer unless it’s a special “posse cut” type thing, we don’t really work that way. He had a lot of input in the recording process and knows when I need coaching and when I need to be natural. Shit man I almost bagged the original recording of “Jogger” but he wouldn’t let me!

Fun little fact here, the pressure was really on me at one point, he was ahead of his curve and I was behind on writing so I kind of started panicking. I had 4 days off of work and in the middle of night I decided to take a bus to Montreal, I turned off my phone and spent the next 4 days writing, drinking and wandering that city alone, well maybe chasing girls at one point but work mostly. It was incredible, and helped shaped that record completely. It wouldnt have happened without Montreal.. And yea.. I’m a weirdo.

The remix album was an idea we came up with in Europe together. We talked about it and once we found out Blockhead was down we got excited and started assembling the all-star cast. Everyone was gracious enough to get involved and really professional. We were both extremely pleased and EVERYONE crushed their assignments.

HHD: Something that sets you apart from the crowd and makes you a favorite at HHD is your willingness to take chances with your music. Do you view it as “taking a chance”? Does the fan’s and critic’s reaction matter to you when you are creating in the lab or is strictly personal? Break it down.

PremRock: I appreciate that, but I believe taking chances is a product of growing more and more comfortable with yourself and your sound. As I grow older and more experienced what I’m doing might be considered “taking chances” but it’s really just the next phase. I am scared of stagnation, so I put myself in situations that will inspire growth and lead to more creative ideas. The most powerful tool an artist can acquire is fearlessness. A fearless artist can be unstoppable. Of course I care what fans and critics think but it could never affect my creative process or I’ve done something terribly wrong.

HHD: In the previous question I was really thinking to your most recent release, Mark’s Wild Years. What is the background behind the making of the record? How easy was it to blend Tom Waits and hip hop?

PremRock: “Mark’s Wild Years” was both challenge to myself and tribute to my favorite living artist. I wanted to create both a unique take on an underappreciated catalog but also create a project held to some pretty high standards. I aimed to appease the biggest fans of Waits himself in terms of quality. I didn’t cut a single corner because I would be doing everyone a disservice if I did so. I found the blend relatively natural and I was very surprised he hasn’t been a larger sample source in the hip-hop world. I was glad to take the reigns with the first tribute project I’d ever heard of.

HHD:Do you have a favorite track from that album? Mine was the quick strike, A Soldier’s Things. There was so much art packed into a minute and a half.

PremRock: Hmm good question. I’d say the way “Christmas Card..” came out or the fact that “Dirt in the Ground” was basically written in 15 min. after hearing the beat, because I was so inspired. I love those two tracks and I believe they did the originals some real justice.

HHD: I ask this question of everyone and am very curious to your answer: How is PremRock going to define success as an artist?

PremRock: At this point I believe the growth is becoming slowly noticeable. I have actual “fans” now. Complete strangers who contact me and tell me how my music is affecting them. I want a million more of those. But I won’t define success until I can sustain myself comfortably off of music alone. I’ve been grateful enough to perform all over the world and release some well-received records but I’m not anywhere close to where I want and should be yet. Maybe I’ll never “make it” by the casual fans standards but I can guarantee I will by my standards. I have to, never believed in that whole “back-up plan” thing.

HHD: Who among your contemporaries would you recommend people listen to in addition to your music?

HHD: What’s the plan for you in 2013? What releases or appearances do you have in store?

PremRock: Well, I’m finishing up a tour right now. I went from Las Vegas all the way to Toronto in 26 days. I’m exhausted! But I’ve been collecting beats for my next album and have acquired some really heavy hitters so I’m thrilled to get back to NYC and start recording this. No date yet but when it’s ready it’ll be really ready. I also already wrapped up an EP to be released w. Czech producer Talpas as a European release so whenever that’s done being mixed it’ll be available to the public. I’ll be on a few guest spots as well, but let’s let them be a surprise.

HHD: Any other thoughts for our readership?

PremRock: Keep reading my man Stefan! Haha keep supporting the music you believe in and turning friends onto it, it really makes a difference in the end. It ALL matters. Thanks very much for having me here and hope to see you all in the flesh at some point and time!