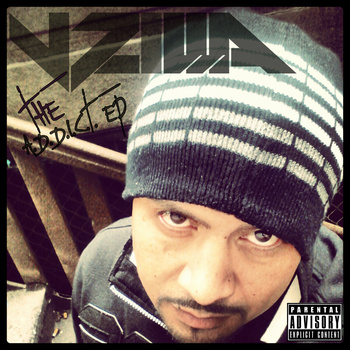 Here’s another project that I have been holding on to for a while that deserves some recognition for being a really ill release.  Often times projects that drop around the holidays get lost in the shuffle and that’s really the case here.  I heard about it, listened to it, and meant to post something months ago but just fell short.

V-Zilla is a member of AOTP which I am not sure a lot of people realize.  He hails out of Houston which might be a reason why people forget this affiliation as most of the other members dwell on the east coast.  I first heard V-Zilla on the release, Interview With A Monster and was impressed with big beats he had on the album and the tight flow he possessed.

The A.D.D.I.C.T. EP is a much shorter release than his previous album which makes it easy for new listeners to get familiar with it.  It’s also, when it’s at it’s best, a very dark and cynical release.  The EP is a series of conversations and narrations of stories of good and evil and struggle.

The first track, Dear Heavenly Father, really sets the tone for the rest of the release.  The production features banging piano keys and then some spooky sounds coming out of synthesizer.   This track acts like a conversation with God.  V-Zilla knows he has got his hands dirty and asks God for protection and to make him an instrument of change.  Think of it like the Hustler’s Prayer redux.

Hoodie Musick will have listeners throwing their middle fingers in the air.  V-Zilla addresses how quickly your world can fall apart.  He doesn’t hold anyone in too high of esteem and is aware that when people are quick to give him dap, they are also going to be the first to stab him in the back.  It’s a very cynical track which of course appeals to me.   So when your house of cards falls don’t tell him he didn’t tell you so.  Check the chorus:

Fuck holding a job, Fuck holding a girl / Fuck being a slob, and Fuck conquer the world / Fuck whatever problems you got, just let it swirl / When it all falls down you better be taking cover

Overall this is a short release that I throw on deck on the regular.   It’s eight tracks of a man bodying some ill beats.  It should have been something I shot over to you guys months ago but what can I say…Sorry I Slept.