The Plexiglass Fountain – Concrete Mythology (Year Of The Dragon) (2012) 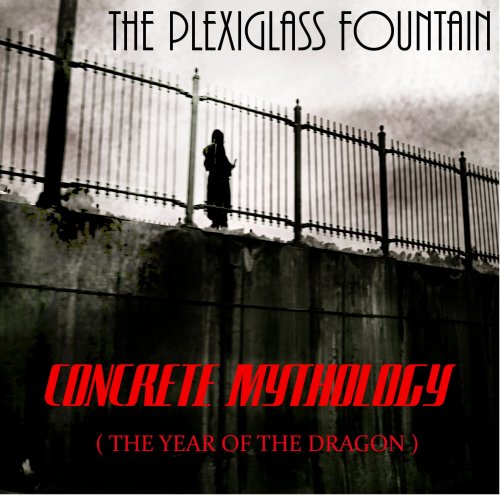 It’s time that I bring you something different in a not so subtle way.  The combination of producer/emcee, Tokyo Cigar, and emcee, Cyclops, constitute the group The Plexiglass Fountain. On the promo for the album, Cigar is described as eccentric.  I am not sure about that but how about the the term nouveau?  Or maybe cutting edge, or nontraditional?  I think all of those adjectives fit our combination emcee/beatsmith.  Cyclops is described as poetic, and I think that shoe fits without exception.

Kill Zone typifies the sounds throughout the album.  Tokyo Cigar never lets you get to comfortable.  He provides some drums that knock, but just as you start nodding you head, he scales it back with some cascading synth to give the track a totally different feel.  He creates different soundscapes for each emcee, so it’s almost like multiple songs in a four minute plus time period.  The Cause leads first with a more confrontational style, Tokyo Cigar follows with a style  that I will describe as unorthodox (I will explain this a little further down).  Last but not least, Cyclops lends a more lyrical value to the track.  Everything is contrasting about this song, and that is pretty dope.

Fallen is another track that is more of a journey than it is a song.    It’s a very dark journey if you don’t mind taking the trip.  It’s depression in the spoken word. The first thing you will notice is the vocal sample from Laurie Webb’s Aren’t You Clever that Tokyo Cigar uses:

The next thing you should pick up on is the cosmic beat that the emcees are about to spit their depraved lyrics on.  It’s stark and bleak which fit the mood seamlessly.  Check out the guest verse from Keb0:

Handsome muthafucka, numb in the flesh though / Cocaine for breakfast, liquor and expresso / On the verge of breakdown, shattered and depressed low / Holding on to things, maybe I should let go

Vampire is one of the hardest songs off of the album that details the artists’ nocturnal lifestyle.  It’s also probably the most traditional production wise, in which Tokyo Cigar utilizes a Big Pun sample to perfection.  I am a huge fan of the well placed sample and the man doesn’t disappoint.  This track harkens to that 1990s New York sound.

And to look back at the point I made earlier about Tokyo Cigar’s style as an emcee as being unorthodox.  I say that as a compliment.  It’s the perfect mirror to his style as a producer.  You never know which way the beat will turn, just as you never know where his rhyme scheme will turn.  It’s not ABAB rhymes.  He’s always changing his inflections and his patterns to the point it seems like he’s having a conversation with you, at points belting out his verse as if trying to prove a point.  Check part of his verse from Vampires:

Back stabber / Pocket grabber / Call him OJ / Disease in the soul since the old days / He flirt with Devilish Dirt / Drain the life ashes from the rich and the peasants / Hear the evil in his voice resonate and rejoice / Flowers die when he walk past / Storm clouds, lightning flash / Ambiance / Toxic Renaissance

His partner in rhyme, Cyclops compliments that style with a more poetic word play that showcases best on tracks like Neon Moonlight and the soulful Midnight Symphony.

Concrete Mythology is all about giving the hip hop listener something different.  It’s about switching the contemporary for something a little bit more avante garde.  It’s taking the industry standards and changing the expectations. There are so many so many different nuances to this album, that you will pick up on something new with each listen. So give this album a chance and see how this duo and their guests put a little polish on this hip hop gem.