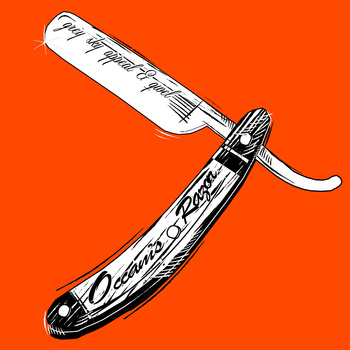 Two notable forces have collided to provide you with the project, Occam’s Razor.  One is noted Chicago lyricist Qwel, and the other is underrated New York based group, Grey Sky Appeal. I have been a fan of both, but Grey Sky Appeal is one of those groups I wish more people knew about.  Their skill is unheralded but really merit notoriety as they can spit with the best of them and have a knack for dope production.

It seems that this project started with Qwel rocking over some unfinished beats from GSA’s producer Taj during a tour in New England.   Grey Sky Appeal then took to build upon Qwel’s work, add their verses, and finish the production to create Occam’s Razor.  It’s not your typical EP.  You are really going to have to pay attention to the intricate lyricism or these bars could easily pass you by.

Occam’s Razor, for those of you who want to know, is a philosophical principle based on the premise that the simplest way is always the best way.  Now try applying that to every facet of your life!

On the track Brains, it seems that the emcees are equivocating today’s record industry to the zombie apocalypse.  Everyone is just looking for the same thing…Brains!  It’s like replacing your favorite character from The Walking Dead and replacing him/her with the most cliched rapper of the moment. And believe me, you have an assortment of acts to choose from.  The lyrics are crafty, almost too crafty, as it takes me a moment to wrap my head around every nuanced bar.  But it’s enjoyable to try and cipher the track’s complexities when everything else seems so mundane by these standards.   The production is also enjoyable.  The bass line is catchy and the vocal sample gives this sound the necessary edge it needs to compliment the track.

Shark Attack has an appropriate, what I will call, altered beach music. The production has that twangy  distorted guitar sample that seemed popular in the 50s and 60s.  In between the lines is the desire for the emcees to succeed and instructions on how to handle yourself when dealing with adversity when attempting a career in music.  At least that’s how I took it, but perhaps you might have a different take?

Order Up has the emcees playing short order cooks speaking up something delicious for the masses.  They are using that good cooking as a metaphor for this good music they have going on here.  Comprehend?   The production has a lot of complexity with a lot of different sounds going on.  But what, in lesser hands could just sound like confusion, Taj turns into a masterpiece.  There’s one lyric here in the the third verse that states: “Everybody wanna eat, nobody want to load the dishes.”  Such is the music industry!  Love it.

If I could use one words to describe this release it would be, dynamic.  I never got comfortable throughout the project.   I mean that as a great compliment.  I get so tired of hearing the same old hum drum.  Everyone is duplicating the next man.  Grey Sky Appeal and Qwel have a different offering.  Those of you who follow my reviews know that I like to quote the artist’s verses.  I simply couldn’t do it here.  Every once in a while you get a release where the rhyme schemes are nearly impossible to hone in on or the complexity of thought is too much to try and put it into text.  It just wouldn’t translate well to paper (or web page).  The production is without flaw.  Taj keeps moving the listener around.  In one track he takes you to the beach (Shark Attack) and the next you wind up in old Europe listening to an accordion sample (Coffee and Smoke Remix).   He also throws in a jaunt to the orient on Sugar Cubes.  I don’t know how a project could be made any more entertaining in a seven track set.  Check out Occam’s Razor and encourage your friends to listen to music that’s not dumbed down!