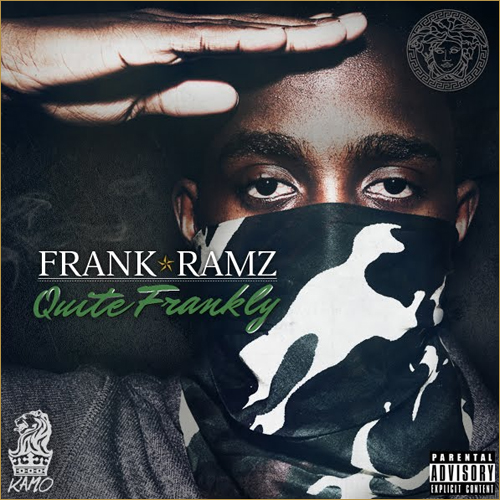 I am familiar with Frank Ramz, but to be perfectly honest I can’t tell you that I was a big supporter, or that I was up on his skill level.  If I did say that, it would be disenegeous.  He was lost in the pack of my vast iTunes collection, until I heard Quite Frankly.   He made a believer out of me with this release.   Sure he has production from the likes of Blue Sky Black Death and Apollo Brown.  That might draw people to the album, but it’s Frank Ramz who puts on the show.

The joint Individuality is the one that I want to discuss first.  This is a mellow joint with a pulsating bass line.  The guitar is a really nice touch as well.  The whole theme of the track is Ramz breaking away from the pack  of his contemporaries.   He lashes out on an industry where everyone covets materialism but doesn’t appreciate individualism.  This is a really nice joint.

Kamo Gang started off a little mundane but as the track went on it built incredible momentum until it became one of my favorite tracks on the album. The production team of Blue Sky Black death really did some incredible board work on this piece.  The production is so complex that it borderlines on epic.  This is the type of production that would work on a movie score.   Ramz bodies this beat.  The production and rhymes seemingly feed off of one another.

On the next track, Success Is Failure, I really want to hone on what Ramz can do verbally.   What’s his lyrical style?   Well, on this track it can best described as pure and raw.  He is rhyming like he has a chip on his shoulder and some fury to let loose.  Take a peak:

See I’ve done suffered enough, and it’s time to put my knowledge to use / Soldier of war, I polish my boots / And y’all should salute /  All of these years these motherf*&#as have been hiding the truth / But I was seeing straight through those n$%#as like a bottle of Goose / Hop in the booth / And turn my pain into pleasure /  Then my failure becomes success. I made that change for the better / And whoever got those silly thoughts of claiming my treasure / Which is my freedom, you can keep all the fame and the cheddar

There’s a lot of maturity in Frank Ramz’s demeanor.  It is apparent that this artist is tired of playing games and intends to take the next step in his career, building it the right way…on his talent.  Quite Frankly is not entirely perfect.  There were a few tracks that seemed out of place to me (ie S.A.D. and Backside)  The songs weren’t bad but they just didn’t fit the demeanor of the album in it’s entirety from a listener’s perspective.

When Frank Ramz speaks from his heart and harnesses emotion, he shows he is capable of making remarkable music.  Quite Frankly more often than not,  demonstrates dope production and masterful wordplay, which in turn separates Ramz from the pack in my mind.  This is the release he needed to make to be distinctive.   So congratulate the man by downloading the project for free and passing the word about.