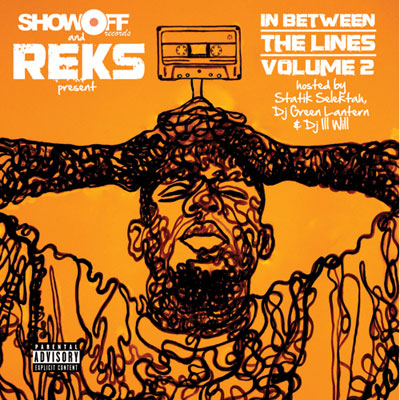 Album: In Between The Lines Vol. 2

Some artists can barely pull off a fifteen track mixtape, while Reks on the other hand  goes double or nothing, and hits you with thirty top choice jawns for your listening pleasure.  Of course there are some tracks that knock harder than others, but as a whole this is a remarkable project.  Reks does not sacrifice the quality of his music for the quantity.  There are plenty of great songs to be found throughout.  The project features fifteen different producers and twenty-one different guest emcees (by my count).   Having all these different sounds and voices lends the project all kinds of diversity and dopeness.

While I think all the tracks are solid, tracks nine through fourteen border on the phenomenal.  Those five tracks had me jumping out of my seat.  I couldn’t believe my ear drums.  These tracks were that damn good!

Pray For You (Homicide Note) is that type of vicious spit we have come to expect from Reks.  He annihilates a Statik Selektah banger which has become a regular occurrence in the last two years.   Reks sounds downright angry on this track.  He is swinging for the fences as he puts on blast some of the radio’s favorite sons.  I like it when Reks sounds fed up.   It brings out the best of him.  This is one track that won’t be easy to forget!

Eff You is an ode to those who promote gimmicks in hip hop.  Reks takes his music very seriously.  He does not care about the latest trends, fashion, or dance crazes.  Reks is just here to give you the word raw and direct.  Nottz handles the beat on this one.  The sound is fast and furious.  The instrument samples on this track make this joint pop, but it’s Reks lyrics that make this joint one to put on repeat.

Get Rowdy is arguably the best track on this mixtape.  The production from the Bassheadz is on some nightstalker shit.  A driving bass line,  hot drum pattern, and clashing cymbals just prove the perfect mix for Reks, Sha Stimuli, and Reef The Lost Cause to spit their rhymes over.  This song is the type of cut that would make fans look for someone to punch in the face.   Aggressive and nasty would be the best adjectives used to describe this song.

Reks name equals dopeness in my book but even I was initially suspect with a thirty track mixtape, but to say it is merely solid is just and understatement.  Reks delivers verse for verse and song for song.  The features are impressive across the board.  If you were not on board with The Year Of The Show Off before this mixtape, be sure to jump on the band wagon now.  No one will blame you.