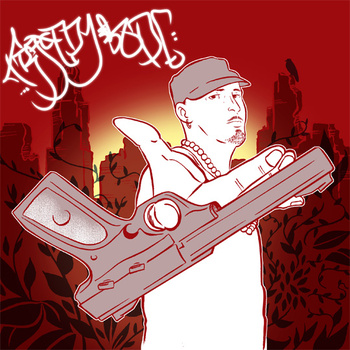 There should be a new genre of music, categorized as “honest man’s music”.  There is something powerful when a man or woman lays their life out in front of you.   JustMe is breaking down the barriers between artist and listener on his latest release, Tragedy & Dope.  He invites the listener to share a piece of his life and imparts advice through personal experience.

I don’t categorize JustMe as a “Christian Artist”.   He is an artist who happens to be Christian.  His message is inherent in the rhymes and never comes across being overly preachy.  He is not going out of his way to proselytize. His relationship with God simply comes through the words he is spitting.  I feel that, and I think the every day person will too.

Tragedy & Dope is produced entirely by Deacon The Villain from independent mainstays, the Cunninlynguists.  And while his compadre, Kno gets much of the shine on the production for their group, Deacon displays great ability  in producing JustMe’s release.  The sample use throughout the album  really sets tone throughout the joint.   He also does a few of the hooks himself which accentuates the album.  His crooning on the hook for The Prodigal, had me playing that track over and over.   Superior production from Deacon highlights this album.

From the initial tack you know that Tragedy & Dope is going to hold your attention.    The title track is intense as Deacon blends vocal samples and a dope drum pattern together.  It’s a short track but it really does the trick.   I am a sucker for a dope vocal sample, guitar loop, some strings, and a dope beat.  JustMe rips this uptempo track diligently letting us know that “God made both, Tragedy and Dope“.

I Know also utilizes a well placed guitar sample.    The track is a little slower than the aforementioned but suits JustMe perfectly.   He spits verses relating to how we make decisions under the influence of the devil.   His lyrics are insightful and dope.  You can feel his passion for his message.  He brings a different view point to our every day life, on that involves that daily struggle between good and evil.   The hook is done by none other than Deacon The Villain and hits it’s mark in being soulful and provoking.

The aforementioned track, The Prodigal, is really the highlight of this album.   JustMe gives us a window into his life being the prodigal son.   If you are not familiar with the biblical story, I invite you to sit down for fifteen minutes and get acquainted with it.  He turned away from God, and lived a life of  sin.  He reveals the ills of his early life and how he made a turnaround to get back to God.  I can’t do this song the justice that it deserves.  Production is remarkable and the song really reached me on a personal level.  I can’t think of too many in recent memory that moved me to hit the repeat button so often.  Deacon’s chorus rolls around in m head:

This album is dope.  It can not be overstated.  It was a true pleasure to sit down and listen to this from front to back.  You will not find a better album for five dollars in 2010.  Rest assured!

One thought on “JustMe – Tragedy and Dope”