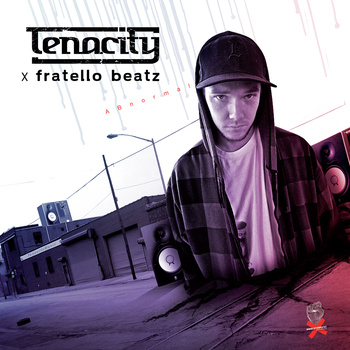 Tenacity has dropped two albums this summer.  One album, Everything Must Change. was dropped with all production done by fellow Michigan artist, Eddie Logix.  The second album, and the one I will be discussing, entitled ABnormal, was produced entirely by  Fratello Beatz who resides in France.  Both of these projects are incredible in their own right.    The production by both producers is impeccable, but the one common denominator between the two projects is of course Tenacity.    Tenacity’s writing prowess is seemingly way ahead of others in his craft.  What makes these albums special is the way he creates songs and crafts concepts.  The end result is some powerful music.

ABnormal is impressive from the intro on, but of course I want to delve into the tracks a little deeper.  I Could… is a track that instantly grabs the attention of the listener.  It’s got uptempo production giving the entire project a ton of momentum.   There are a multitude of sounds going on in the song, but they all mesh incredibly well.  Tenacity really delivers thought provoking bars that will make you reflect on life a little bit differently.   The premise of the track, is that he could do a lot of different things if he wanted to.  He could waste his time or he could be more productive.  He could spend his money on material possessions or he could handle his finances differently.  In certain parts of the song he addresses aspects of hip hop culture, and in others its just a reflection of life in general.   Here are some bars to contemplate:

I could trash talk for days /  But I could do something better with my time…I could get blazed! /  I could spit flames / I could rip stage upon stage /  If I could get known, I could get paid / I could get fade / Then I could get played…out / Just as quick as I came / Or I could sustain a career I am able to maintain / I could give a fuck less about the game

On the track Uh-Huh, I believe Fratello Beatz decided to come thru with the bassoon.  You don’t hear too many producers unlocking the bassoon for a song.  Unlike the track, I Could…, Fratello Beats, scales the sounds down, making the track a bit more stark.  Tenacity treats it the same however by ripping bars in abundance.  This is the one track off the album that is a bit more braggadocious than being concept related and is more of a flexing of the skill level.

Come Up is an interesting song.   Tenacity details the things that could happen in your life that could be considered a “come up” in your life.   For instance:  When you don’t have to pay the bar tender because he’s giving you a pass.  Finding kush on the ground.  A three day weekend.   All of these things are come ups.  Tenacity is quick to offer a disclaimer in the last verse, stating “come ups” are something that happen spontaneously in life and you should go around seeking them exclusively.

Forward To The Past is a cut where Tenacity offers two different stories about what a person would do if they could go back and have a “do-over”.   What would they change? How could their lives be for the better?  Who hasn’t thought of that?  We all wish from time to time that we could do something better or change our circumstance in one way or the other.   The production suits this song well.  Here Fratello Beatz uses maracas,  a harp, and some piano keys to set a tone.  Check the chorus for a glimpse into Tenacity’s mindset:

If you could reverse time would you make some changes / Look at the chapters of your life, would you change some pages / What if you could rewind to your childhood and redo / All the things you did wrong that bothered you / You could be first instead of last / Imagine jumping back / And fixing everything you trashed / Think of how it would be if you could go back and do the math / You could solve your problems before they start moving forward to  the past

I listen to music all day, every day.  I listen to up to eight albums in a twenty-four hour time frame and I rarely get excited about an album or an emcee.  But I am excited about this album and it’s creators.  Tenacity and Fratello Beatz did a phenomenal job with ABnormal.   There are of course albums that have come out this year that have been great within their own right, but none with so much depth as this one.  Listeners get tired of hearing about how great an emcee proclaims himself to be, how many guns he’s toting, and bodies he catches.  We want something creative and that forces us to use more brain cells.  This album is something that you can set your ears and mind upon again and again and still not get enough.  I hope enough fans will give this the listen it so rightfully deserves.